Submitted for you consideration, I give you, The Amazing Johnathan by Michael Hopkins (me). 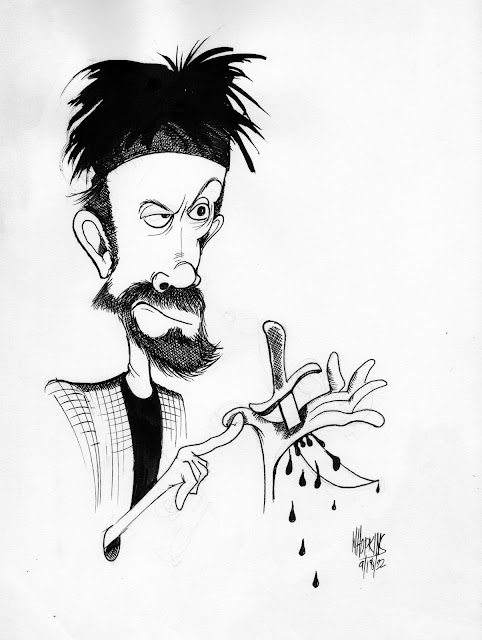 The Amazing Johnathan (John Edward Szeles) was an American comedian and magician. His act was  composed of hijinks, interaction with  audience members and  some magic tricks. From 2001 to 2014, The Amazing Johnathan was a  headliner in Las Vegas
If you are not familiar with The Amazing Johnathan, Ill direct you to this Rolling Stone article from February 23, 2022 (unfortunately the day after his passing)
https://www.rollingstone.com/culture/culture-news/the-amazing-johnathan-dead-obituary-1311643/
John Edward Szeles was fucking amazing!
I created this caricature on September 18th, 2022 after watching a documentary about him. It was created on 9"x12" Canson Mix Media drawing paper, with India Ink and Faber-Castell Pitt Artist Pens
Posted by Michael Hopkins - Michael Hopkins Cartoons at 6:47 PM No comments:

That look when you realize your old team, that had no chance of defeating your new team, just defeated your new team. 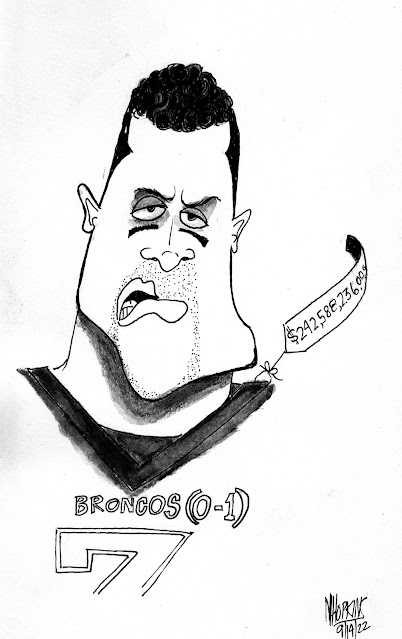 I’m taking a small break from The Daily Planet today and tomorrow as I'm resting from some minor skin cancer surgery (which is also why there was no blog yesterday). Although it doesn't feel minor to my shoulder, apparently this skin cancer is relatively common. The type of skin cancer I have is called, Carcinoma. Here’s a description for you…

"Carcinoma is cancer that forms in epithelial tissue. Epithelial tissue lines most of your organs, the internal passageways in your body (like your esophagus), and your skin. Most cancers affecting your skin, breasts, kidney, liver, lungs, pancreas, prostate gland, head and neck are carcinomas

Most cases of squamous cell carcinoma can be cured when found early (mine was) and treated properly. Today, many treatment options are available, and most are easily performed at a doctor's office (mine was again)"

Anyways, I’ll find out in about two weeks how successful things went, which I'm pretty confident things went well. I have a great Doctor, and his assistant and himself performed the surgery in his office, with very little discomfort. The worst part of the visit was the injection of the Lidocaine to numb the area being cut and that wasn't really that bad at all, basically it stings.

Although it was minor, whenever you hear the diagnosis of cancer, it makes you think about life and where you are in your journey and all you have planned for the future and have yet to accomplish. It made me think about how precious life is and the fact that we don't have forever. I have so much left to accomplish, I had better get busy.

Another thing that crossed my mind is the size of my goals. I’ve come to realize that the loftier the goal, the harder I work to achieve my goals. Recently (maybe because of my age), I've lowered my goals and expectations. I think this was a bad move because when I lowered my goals, I came to realize that I haven't worked as hard to achieve them. This was probably because (logically) the lowered expectations were easier to achieve. The cancer diagnosis made me realize I still want a lot out of life. So starting today, I’m starting over…

Sometimes You Get Doodles #1

This doodle of an airline chasing its tail was created in my head while waiting on my delayed flight from Las Vegas to Reno on September 8th. I finally got it out of my today. As such, I guess it was delayed as well. 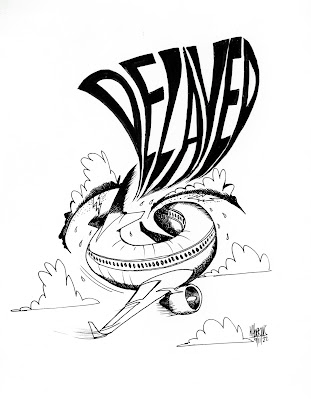 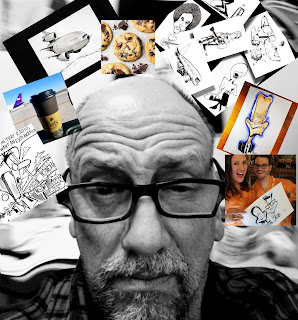 Good morning. Blog number 3 of 365. I started this goal (365 Blogs in a row) on my 61st birthday and I WILL complete this goal. Hopefully, by the end of the goal, I will have figured shit out and I will be at a better place when it comes to my state of mind. Happiness is attainable.

I love drawing and creating art. When I'm in the process of creating art I’m in a better place mentally and physically. I know that may sound strange to many of you but it’s the complete truth. I’m a better person when I’m creating. Opposite of that theory, when I'm not creating I'm miserable. Even if I’m doing something that I enjoy, I only receive temporary satisfaction, for a short period of time. However, it’s just a fix, like a good cup of coffee (something else that can't live without)

Take for example my current occupation as a mild mannered reporter for the Daily Planet (occupation and names have been changed to protect the innocent..i.e., me). I wouldn’t be here if I didn't need a second occupation to pay the bills. In fact, I wouldn’t  have a second occupation, if my art paid the bills. However, since do I need to pay the bills, one would think that this occupation would be perfect for me. I should love this job. This job should be the least “miserability creating occupation”. I'm surrounded by aviation. I love aviation. However, most of the time, I’m miserable at the Daily Planet and I unconsciously find things that make me more miserable and then I dwell on them. Trust me, I don't have to look far to find miserable creating elements at The Daily Planet. There are plenty of things there to make one miserable, including, incompetency, heat (in the summer) and the cold (in the winter), inadhereance to policies and working with psychopaths (you know who you are). However, even if everything was sunshine and lollipops at the Daily Planet, I would still find a way to be miserable. The complete end of my miserableness will only come when I’m completely self-sufficient as an artist. Until then, I’ll keep creating, and overload on caffeine to get through my day..

Which bring me back to the purpose of this Blog; i.e., to figure shit out and of course. bring the universe’s attention to my scribbles..

P.S. Universe, the links are below… 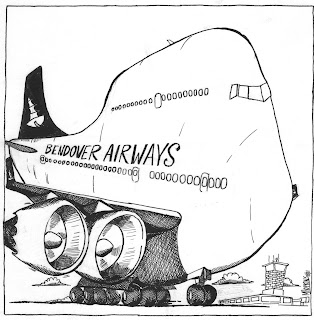 If it wasn't for the fact that there's a possibility that I'll save time as opposed to driving (and that's not a guarantee, given the constant and continuous delays) I would drive everywhere I needed to go.

Let's look at an example.

To drive from Reno to Las Vegas (or vice-versa) is approximately 7 hours (in comfort, no security, nobody in my car, whose company that I don't enjoy). So far on this trip home I've already spent 2.5 hours and my flight was delayed (surprise, surprise!) so I still have 1.5 hours until Southwest Airlines best (Ha!) guesstimate of a departure time. That's already 4 hours! The approximate flight time from Las Vegas to Reno is approximately 1.5 hours. So the best case scenario is that this trip will take 5.5 hours. So for an additional 1.5 hours, I could have taken my car!

To further elaborate my point. Given the fact that if I was driving,  I would have left the hotel before dawn means, I WOULD HAVE BEEN HOME BY NOW!!

P.S. I made it home at approximately 6:30pm. That was almost exactly 7 hours after my Uber driver picked me up at the Luxor Hotel Casino (to take me to the airport) or approximately the same amount of time that it would have taken me to drive home.

You Say It's Your Birthday!

Good Tuesday everyone! It's my birthday today and I'm Waking up in Las Vegas.

What?? You were expecting, Katy Perry??

It's the fourth day of a marketing trip for my caricatures. Two contacts made, several business cards passed out. But today’s not about business, it's about me. Which I guess about business because my business is me, so we'll say it's about me, which is about my art, which is what I’m about (anyways).

I thought I would blog my day here in "Sin City" and share my thoughts about my day and at the beginning of my 61st year on this planet.

Today started out with a spectacular rendition of, Happy Birthday to You, by my younger brother Roger. Thank you Roger. For those you you what don't know my “slightly younger” brother, here's a caricature of the of the character (his family included). 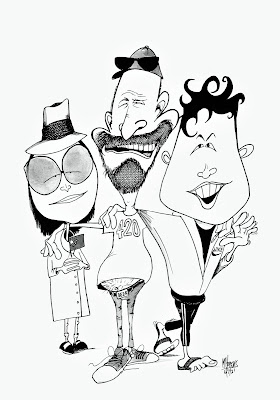 I went downstairs at 6:30am for breakfast. Unfortunately for my wallet, the Pyramid Café does not open until 7:00am, so I threw some money in the slot machines. After a disappointing start to slot play, I finished even. Breakfast was amazing! 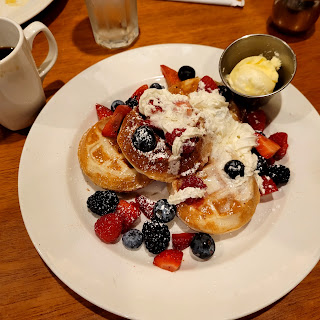 After breakfast, I went upstairs, took a shower and then hit the pavement, the HOT pavement. The high yesterday was around 114 degrees (I don't believe that's a healthy environment for humans to exist in?) Thank goodness today is only going to be a cool 107 degrees.

For those of you who are concerned, Las Vegas is still here. I only took a few pictures, ‘cause I'm sure everyone's seen them before and the strip hasn't changed much.. 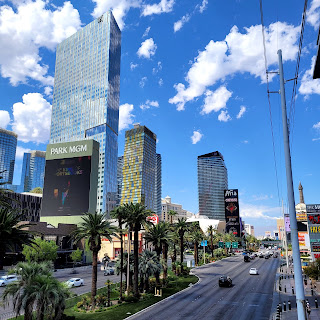 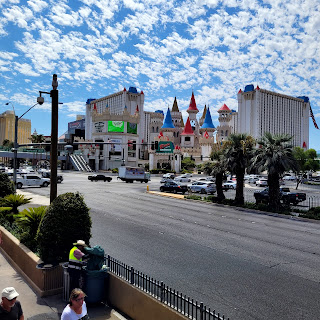 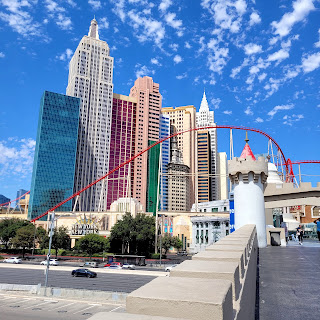 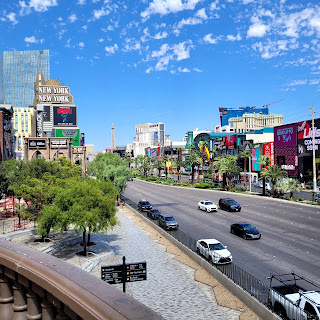 After a bit of shopping from the local street merchants including, The Hershey's Store, The Coke Store, The M&M Store (there seems to be a theme emerging here??) and having a discussion with a local Busker concerning his CD, his brother's health condition, my white privilege and why I should give him my money (I wonder if this person understands there's a reason why people pass him by and pretend that he doesn’t exist?),  I decided to eat more. Today's lunch was provided by Amazing Canes and it was Amazing, Cane! 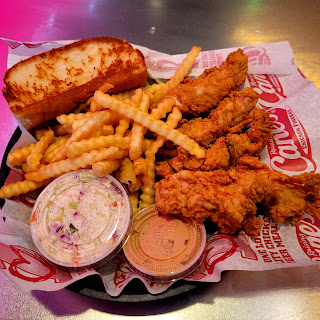 As a birthday present for myself I decided to visit The Titanic Exhibit at the Luxor Hotel Casino. If you're the least bit interested in the story of the RMS Titanic or history in general, you need to visit this exhibit. From the moment you walk into the exhibit (once you get past the obligatory photo pitch person)  you are transported back to that night in April of 1912 and immersed and surrounded by the real individuals whose lives were altered forever on that evening. An astonishing and sobering experience, amidst mendaciousness, that is Las Vegas 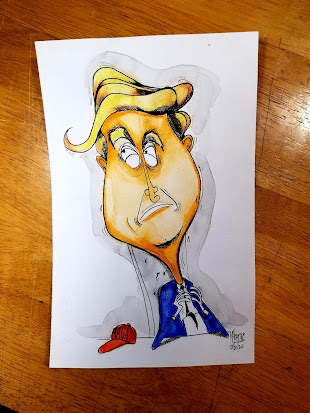 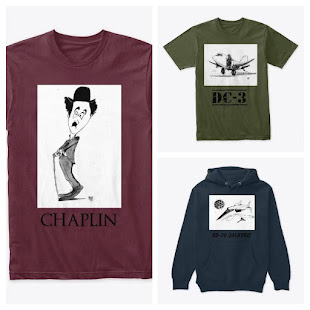 Michael Hopkins Caricatures That You Can Wear!

Welcome to the online store for Michael Hopkins Caricatures

BOOK MICHAEL FOR YOUR NEXT EVENT! 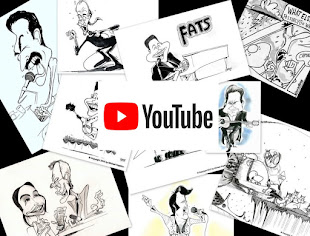 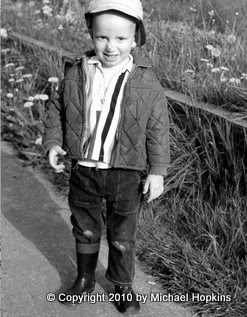